New Zealand Self Drive Tour from Auckland to Auckland

Experience the famous Waitomo Glow Worm Caves, a Maori cultural performance in an authentic Maori Village peppered with a traditional Hangi dinner, see Geysers and take a thrilling Jetboat ride to the Huka Falls. Enjoy stunning views of the volcanoes and explore the vibrant City of Sails – Auckland.

This self drive tour is an awesome week in New Zealand to explore some of the major highlights of the North Island. After experiencing the included, iconic activities you will rest in pre-booked accommodations at the end of each great day.

Explore the diversity of this extraordinary country on a fantastic route with stunning experiences. Enjoy!

Please note: All of our self drive tours can be booked with a chauffeur/tour guide as a private tour option! Enquire now!

Included within this package 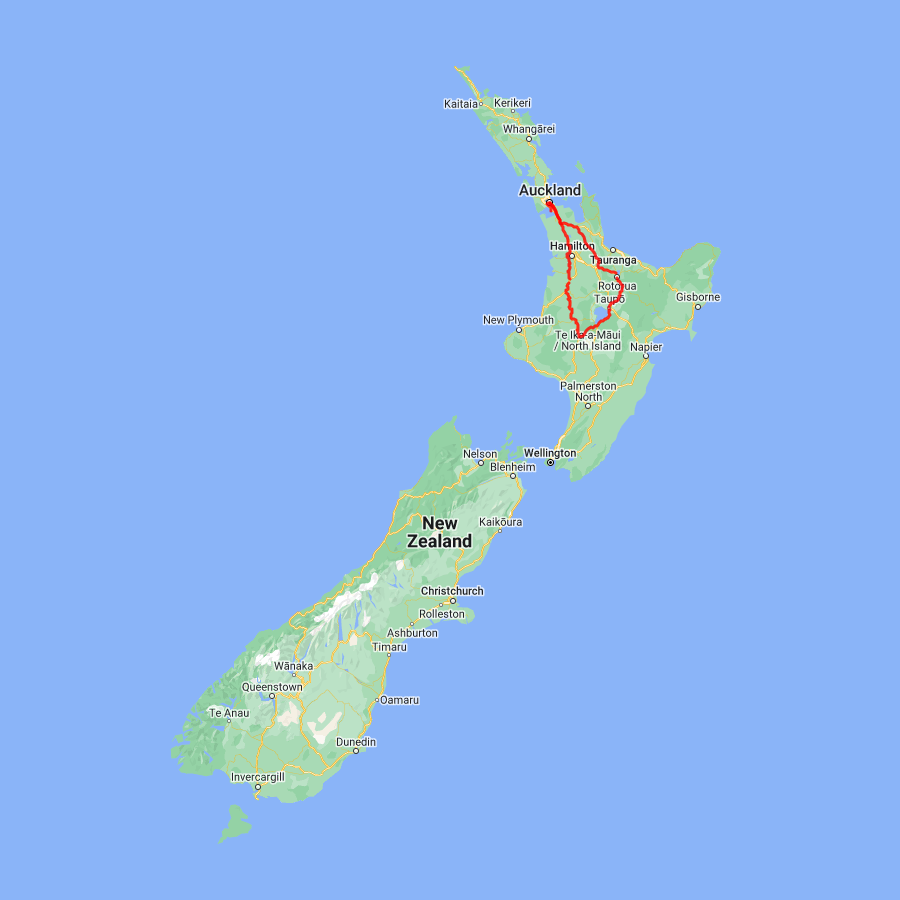 The details below are for each of the days where there is a major driving leg.

Times and distances are based on ideal conditions at an average of 80 kph (45-55 mph approx) and without stops. Plan to take longer than the times listed below to allow time to explore and enjoy some stops.

We all know Terms and Conditions are really boring.

These are no exception. We fell asleep two times while we wrote them!

BUT - we need them so that there is no misunderstanding if you decide to change or cancel anything. If you transact through this website then we will give you every chance to read these. Any quotes and bookings undertaken are done so on the understanding that you have read and agree to these terms. Please read here  our Terms & Conditions for payment options and cancellation policy.
We play fair and we know we play with people who play fair!

The following summary lists driving information for each major driving day of your itinerary. Times and distances are based on ideal conditions  without stops. Plan to take longer than the times listed below to allow time to explore and enjoy some stops.

Once you touch down in New Zealand your detailed tour pack will be hand delivered by one of our trusted representatives. The pack contains everything you need for the duration of your stay. It will include a comprehensive, printed and bound version of your itinerary as well as clear driving instructions and maps for each leg of your journey. It also contains all the reservation details for your accommodation and activities – along with relevant brochures and information.

Auckland, New Zealand’s self-proclaimed ‘City of Sails’ is the country’s largest metro area. Resting between the Pacific Ocean and the Tasman Sea, this urban paradise has something for everyone. Surrounded by native bush, rainforests and an abundance of beaches, Auckland is a playground for both the city savvy and those with an eye for adventure. Explore the central city museums and galleries on foot, or take a drive through one of over 800 regional National Parks to see deserted beaches, waterfalls and native forest.

On either collection or delivery of your rental car you will be required to sign a rental agreement with the car rental company. A credit card is also required at this time and an authorisation will be obtained by the rental car company to cover excess (deductible amount) as specified in the car rental insurance section at the end of your itinerary. Note that the excess or deductible is not ‚charged‘ to your card, just an authorisation is obtained at this stage. Each person who wishes to drive must present their driving licence at this point. There is no charge for additional drivers. Note drivers under 21 are not permitted.

Auckland to Rotorua: The drive south from Auckland takes you past the Bombay Hills and into the rolling farmland and rich dairy pastures of the Waikato. The Bombay Hills mark the outer boundary of greater Auckland area and it’s here you turn inland to central Waikato. You’ll soon go through the town of Matamata where you can visit the fully intact Hobbiton film set used in the shooting of the Lord of The Rings and Hobbit trilogies. Continuing on, you’ll pass several small farming communities before telltale signs of steam and other geothermal activity signal your arrival into Rotorua.

INCLUDED – Mitai Maori Village:  An evening at Mitai will give you an awe-inspiring introduction to the indigenous Maori culture.

Marvel at the beautiful bush setting and see warriors in traditional dress who paddle an ancient warrior canoe (waka) down the Wai-o-whiro stream while trout and eels swim beneath the surface. Enjoy a traditionally cooked hangi meal and round your evening off with a spectacular cultural performance that tells the story of the Maori people, their past, carvings, and ta Moko -Tattoo art. Be captivated by the displays of weaponry and combat and be amazed by the spine tingling Haka finale. Truly an experience to remember.

Explore Rotorua: Peppered with natural hot springs, boiling mud pools and steaming geysers, Rotorua sits within one of the worlds most active volcanic regions. But geothermal landmarks aside, this city of sulphur has a rich indigenous history. Home to several prominent Maori tribes, Rotorua is the perfect place to immerse yourself in our local culture. Spend a evening at Mitai Maori Village for a hangi dinner and Maori performance. Book in for some relaxation at the Polynesian Spa and choose between a mud wrap, coconut oil massage or private mineral pool soak – or perhaps just get them all!

Land in a helicopter on White Island, New Zealand’s most active volcano and traverse the crater for a once-in-a-lifetime hike. Those in need of an adrenaline rush, should spend time at Agroventures Adventure Park static skydiving, bungy jumping, and ‘swooping’ on the giant swing. For a calmer day out, head up the Skyline Gondola for awe-inspiring views of the lake.

While you’re there, grab a night luge pass for an extra thrill. A fifty minute drive to nearby Matamata will land you directly in ‘middle earth’ Hobbiton, and it’s must see for even the most half hearted Lord Of The Rings fans. Round off your Rotorua stay at the Wai-O-Tapu Thermal Wonderland and see the multicolored hot springs, geysers and boiling, mud pools.

Rotorua to Taupo: Today drive through the heart of the Central North Island volcanic plateau.

Visit the thermal regions Wai-O-Tapu Thermal Wonderland and Waimangu Volcanic Valley before arriving into the town of Taupo, which sits on New Zealand’s largest lake – Lake Taupo – a volcanic caldera formed following a massive eruption in the year 186. Just north are the Huka Falls and a short detour to view is highly recommended. Get up close to the spray with a thrilling jet boat ride or see the nearby Craters of the Moon geothermal reserve with its great walking tracks around boiling pools and steaming vents.

Taupo is a lively place with many shops, bars and cafes all catering for the traveller and visitor. A whole host of activities can be undertaken here such as bungy jumping, sky diving, fishing for trout in the lake and rivers, kayaking, sailing, horse riding and walking and hiking to name a few.

INCLUDED – Hukafalls Jet Boat Ride: The Huka Jet is 30 minutes of pure fun and exhilaration, skimming close to cliffs, sliding past trees, feeling the adrenalin of full 360 degree spins. The excitement continues right up to the base of the foaming Huka Falls, where you get a spectacular water level view to New Zealand’s most visited natural attraction. Nothing compares to watching 220,000 litres per second tumbling over the cliff face towards you.

The water from the mighty Huka Falls runs down the Waikato River through a series of Hydro Power Stations. You’ll get a view of the Wairakei Geothermal Power Station in the comfort of a powerful Chevrolet V8 jet boat. This unique Power Station uses underground geothermal activity to produce hot steamy water. The Waikato Rivers beautiful environment is varied and unique and is New Zealand’s longest river flowing north from our largest lake – Lake Taupō.

INCLUDED – Waitomo Glow Worm Caves and Aranui Cave tour: For over 100 years Waitomo Glow-worm Caves have attracted people from all over the world to this subterranean wonderland. An ancient underground labyrinth of limestone caves, grottos, amazing stalactites and stalagmites.

INCLUDED – Waitomo Glow-Worm Caves: Formed over 30 million years ago there are two levels to the Waitomo Glow-Worm Caves which are 16 metres apart. The upper level is dry and includes the entrance to the cave, the Catacombs and the Organ Loft. The lower level consists of stream passages and the Cathedral. As you glide quietly beneath the lights of thousands of glow-worms, it is only the gentle sound of dripping water that reminds you that you are deep underground and not beneath a star filled sky.

INCLUDED – Aranui Cave: Located in Ruakuri Scenic Reserve, Aranui is a dry cave. There is only one entrance to Aranui and without a river flowing through, it houses very little life past the entrance. However, just inside the entrance is a colony of cave wetas. Aranui is famous for its beautiful arrays of stalactites, stalagmites, flowstones and unusual formations.

Waitomo to Auckland City: The lush farmland of the Waikato and the limestone hills of the Waitomo region provide some great scenery as you head north. Visit the Otorohanga Kiwi House en route for a great look at some of New Zealand’s native birds in particular our famous flightless namesake.

Depart Auckland today: Explore more of vibrant Auckland City before dropping your rental car at the airport depot and continuing your onward journey. Please remember: Fill up your car with fuel before returning it to the rental car depot at the airport.Farewell from New Zealand. Thank you for visiting our beautiful country! 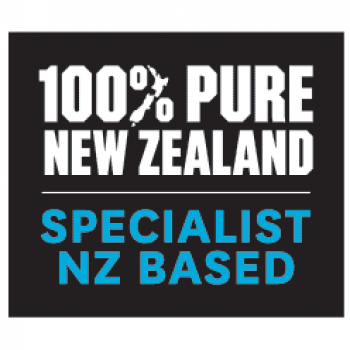 Enjoy the Holiday of a lifetime

No, we don’t like! We closed down our facebook, WhatsApp and other social media accounts because of social concerns, and privacy concerns. We support instead the own your data foundation.